Zeera is a young beastwoman making a name for herself as a teen idol in the overworld. She dresses bizarrely, but that's par for the course in the world of showbiz.

She loves flowers so much that she always has them growing from a handful of soil in her pocket.

It seems she belongs to a rare species of beastfolk possessing a special power known as the "Green Thumb."

This power nurtures life and energy and is evidently the reason the beloved plants she carries about are able to grow without being rooted in the earth.

One day, all of her precious plants withered and died.

It was the day adults exploited her innocence and her talent as an idol to try to turn a profit.

One day, her flowers bloomed larger and more gloriously than ever before.

It was the day that she conquered her fears and chose the life she wanted to lead.

Hearing this, Zeera rustled around for something in her bag.

"Here! This lemon will get you back to normal!"

With that, she handed the fresh, yellow fruit to Zafitte. Grown through the power of Zeera's Green Thumb, it was tastier than any food out there. It was also highly nutritious.

Up-and-coming teen idols knew this and were always begging Zeera for some of her miracle fruit. But that was to be expected, for its rich vitamin content did wonders for the skin and hair.

But Zafitte would always refuse when offered some.

She would also often tell Zeera, "You're an idol, not a farmer."

In their intensely competitive world, where idols must strive to get to the top, sometimes on the backs of their fellow performers, there should be little time to worry about others.

Zeera was faced with the fact that her drive to succeed was inadequate.

Her contemporaries were battling it out because they believed that it was their destiny to stand on the lighted stage.

That was when the doubt about her future as an idol first took root.

Bonna's grandmother was seriously ill. That was the terrible news Bonna received one morning still wet from an early rain.

The news turned Bonna into a nervous wreck. She quickly ran to Zeera with weepy eyes.

"Do you have any plants that cure sickness? Please, Zeera, you have to save my grandma," she implored.

Seeing Zeera like that, with her hair disheveled and face streaked with tears, she knew she could not turn her down, so she dashed off to the library to do some research.

She had heard rumors about a plant that was like a panacea for all disease and sickness.

She poured through countless books and papers. The sun was already setting by the time she found a description of the plant she was looking for.

But as she read it, she came to a line that stated, "Unfortunately, the plant is now extinct."

All of Zeera's hard work had come to nothing. The wondrous cure-all had been overexploited until not a single plant remained.

Sometime later, as if to heap more despair upon Zeera, she learned that Bonna's grandmother had passed away.

Zeera's left hand was grimy from the dirt and dust of old books, and her right hand was covered in ink from taking notes. Her face and body were covered in dust as well.

Bonna could tell at a glance how hard she had tried. She thanked Zeera for her
efforts.

But Zeera could not let the matter go. She despaired at the fact that there had once been a plant the cured all disease and sickness, but in their greed, the people of her world had exploited it to extinction.

She had been unable to save Bonna's grandmother because of their greed.

This was to be the impetus for Zeera to later launch the "Regenesis Project," which was aimed at bringing back ancient plants that had gone extinct.

As an aspiring teen idol, she could not fully develop the strange power she possessed--the power of the Green Thumb.

It was not a power she had actively sought. And as such, no one could criticize her, no matter how she used it.

Then again, there was the will of Pepropé and Princess Palpa. And when Zeera was shown the noble souls who died so that others might live, she went from a troubled mind to a tortured soul who was rocked to the very core of her identity.

"Yes... I've felt it since I first laid eyes on the twisted nature here."

There WAS something that only she could do.

Zeera gazed upon her hands, which held the power of the Green Thumb, as she pondered the direction in which her life had just turned. 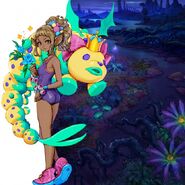