Valkyrie is a sword-type Eidolon added in Version 2.2.0. Up to 3 players can join a Valkyrie room, with up to 3 characters each. 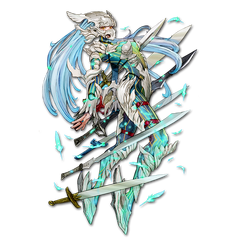 Valkyrie is resistant to all elements.

She is also immune to all Status Effects.

Valkyrie begins the fight with a timer of 2.

The following attack pattern is used and repeated:

In Valkyrie III, after 4 turns, she will summon Arachnobot, who in turn will summon many Arachnolings.

The boss will flee after 6 turns. It still counts as a clear, and you keep any EXP and drops from enemies killed.

Völva needs to be killed otherwise your team will be hit with Demoralize (and you'll need Manmer or Zeera or Palpa to remove it), or it'll heal the other enemies. You'll have two turns to kill it before it can act. If you can't kill it, damage another minion so it won't Demoralize your team. Next, Norn is a good target to give your team 3 extra turns to kill Artemis. Lastly, Idis and Dís should be killed, because once the boss starts using Bash (when it's low on health) on everyone, Idis and Dís can pick off weaker units damaged by Bash (if they aren't one-shot in the first place). Arachnobot in Valkyrie III can be ignored, and AoE from Odin and Ma'curi usually clears out most of the arachnolings. Pincering Arachnobot to buff Ma'curi and Suoh and/or to heal is also another option.