Suoh is a chef running a world-renowned inn and eatery.

He hails from a land in the far east, where he enjoyed enviable social standing. From childhood, Suoh traveled overseas frequently, experiencing the world and broadening his horizons during his formative years.

This kindled a desire to establish a place that welcomed wayfarers of all origins. So he decided to open an inn.

That's the official story, at least. But while it isn't a complete lie, it's a story Suoh composed later, with some artistic license.

The truth is far less poetic. Suoh's homeland was falling apart, and he wanted to escape. He didn't care how or where, so long as he got out.

At the time, Suoh served as an official of a regime that was rotten to the core. Though he gave his all for his country, he was haunted by the distinct feeling that he was steadily hammering the last nail into its coffin with his own hand.

This tormented him until, one day, he finally snapped and took action.

He changed his name and identity and traveled to a snowy land all alone. There, he started a tiny eatery.

And that's when she appeared, bursting into his life with the words:

Her name was Camellia. Suoh was instantly sure of one thing:

The flight from his homeland, his frustration and despair--all of it had led him, surely and inevitably, to this moment.

He was a scabbard that had lost its sword, its purpose, somewhere along the way. And Camellia was a blade, bright and beautiful, that could give him purpose anew. 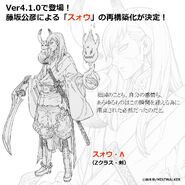