Suoh is a 27-year-old human long parted from his homeland. After wandering for some time, he found himself working as a sellsword in the dark underbelly of society.

He has a striking masochistic streak, leaping at the opportunity for perilous jobs whenever offered. One might say the closer he is to death, the greater his exhilaration.

He prefers solitude, living by the creed that one can rely only on oneself for protection. And no matter how many targets an assignment involves, he always gets the job done on his own.

Suffice to say, Suoh is a formidable man.

But he wasn't always so. An indelible remorse from days long past is carved into his soul, and it's strengthened him.

The dual scabbards he wears are shackles that weigh him down with that regret.

One scabbard sheathes his trusty sword. The other, however, remains empty.

One night, Suoh was uncharacteristically in his cups at a local tavern. A serving lad listened to his half-coherent muttering.

"I'll ask him to take my life. Perhaps with the very blade that belongs in this scabbard..."

Voicing his innermost thoughts must have given Suoh tremendous solace. He was, after all, only human.

He also revealed that the master of that sword was his father's mortal foe and someone to whom he had to atone.

Suoh's homeland was gone. Yet he never failed to uphold the customs of those bygone days.

On the day of a new assignment, Suoh spends the morning in meditation and then prays for the happiness of his targets in their next lives.

He is a firm believer in the transmigration of the soul.

The body is but a vessel. The soul, once liberated, finds a new vessel in which to dwell.

This belief gives Suoh what little hope he can find in this life.

"Well, you're a handsome one."

Her voice rang out sweet and clear as wind chimes--sharp yet somehow soothing.

Yet those sultry words seemed so incongruous with that voice...

"Not really," he replied.

Suoh normally wouldn't have bothered responding to such solicitations at all, but he was intrigued.

With that, she plopped herself onto his lap, her thighs bared and her innermost reaches pressed intimately against him.

Suoh had no choice but to take her in his arms.

His tone was indifferent and he seemed utterly imperturbable.

Just then, her scent tickled his nose--a fragrance that kindled fond memories.

But he swiftly forgot all such nostalgia as her lips met his.

The next morning, she introduced herself as Camellia.

Though he knew not why, he felt certain that they would meet again.

And they did. As the days passed, they spent more and more of their nights together. Some unknown force seemed to be forging a curious bond between them.

But to what purpose?

In Camellia, Suoh sensed fragility, a keen edge, and an element of danger--like a blade without a scabbard.

Exactly like the sword that continued to elude him, in fact.

The nomadic Suoh thus found himself compelled to stay in one place for once. During this stay, he met a band of wayfarers at the local tavern.

They said they were seeking the Maker.

He thought the idea absurd.

But then he considered how the life left remaining to him was, without a doubt, equally absurd.

Could that change if he set out on a journey with her? He shook his head as he abruptly came to his senses. Why had he suddenly thought of her?

Something about her made him want to protect her. She acted tough but was actually very vulnerable beneath.

In his homeland, such a woman was considered quite endearing. 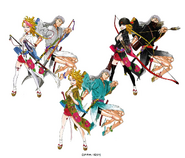