Sheena is a 20-year-old woman who seeks to fuse her two passions: dancing and swordsmanship.

Many have tried to meld the two disciplines in the past, often resulting in little more than flashy swordplay. Not so with Sheena.

You see, the true nature of her talent is healing.

Sheena's dance is not a cerebral or visual art, but rather one that works miracles on cells directly.

But how is such a thing possible? The wondrous effects of her dancing number beyond mention.

Or rather, her dance evokes a variety of effects that she herself cannot yet control.

The answer lies in the ornaments that adorn her hair and body.

These ornaments are actually weapons believed to be crafted during the Age of Myth.

Known also as bacchanales, they consist of a substance that does not exist naturally on this planet. It is far lighter than aluminum, harder than steel, and more pliable than rubber.

When the bacchanales graze each other, they produce a unique ultrasonic frequency, in much the same way insects produce sound by rubbing their wings together.

She unwittingly channels the power of the cosmos themselves.

In short, Sheena is a warrior unlike any other in this world.

It appeared to be forged from a material that closely resembled the ethereal ornaments she wore.

"Well, weapons are designed to take lives, after all," Maralme replied. "Similarities are only natural."

Sheena felt there was more to it.

Though but a humble warrior, she had seen weapons from all ages and cultures in her travels. Yet never had she encountered one so similar to her own.

"Tell me about the sword's history. Please."

Maralme found herself at a loss for words.

The image of her dying husband's agonized face resurfaced in her mind.

"It's not worth thinking about, much less speaking of," she replied curtly.

With that, she walked off and disappeared. Sheena gazed after her, troubled.

"I guess these things really are nothing but trouble..." 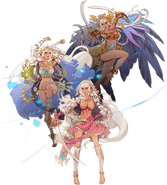