Rejin is a 21-year-old swordsman who rarely stays in one place for long. He journeys lands far and wide on a quest to master the sword.

He wields a sentient blade that his family has guarded for generations. It's said that some wielders can sometimes hear a voice coming from the weapon.

The sword is apparently cursed, and it can inflict wounds that fester virulently--even to the point of necrosis.

Rejin acquired a second sword during his travels. It differed dramatically from his own in structure and design.

It taught him that an artisan's will can meld the culture, customs, and spirit of a place to create something distinctive and remarkable.

At the same time, he had the distinct feeling that a voice from somewhere was guiding his actions.

Rejin once journeyed lands far and wide on a quest to master the sword.

At some point, he grew dissatisfied with his weapon. He suspects that was when he ceased to hear its voice.

It's said that a soul dwells in objects long cherished.

Supposing that voice belonged to such a soul, perhaps it sensed that its master's love had waned and departed in search of another. With that in mind, Rejin devoted himself to a new life as a a machinist and craftsman.

An artisan's will can meld culture, customs, and spirit to create distinctive and remarkable things.

Trusting that idea, he set about studying and rebuilding ancient devices and divine artifacts scattered throughout the world.

And he forged a masterpiece of his own at last.

His harmonics sword is worn on the back of the right hand, while his gravity shield is maneuvered with the left.

The sword's ultrasonically oscillating edge cleaves through anything with ease, while the shield repels objects almost with hostility.

Rejin resurrected an impressive array of weaponry up through the final years of his life. 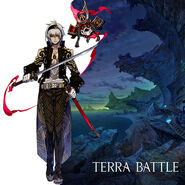