This page is about the eidolon. For other uses, see Phoenix (disambiguation).

Phoenix is a healing-type Eidolon added in Version 3.6.0. Up to 3 players can join a Phoenix room, with up to 3 characters per player. 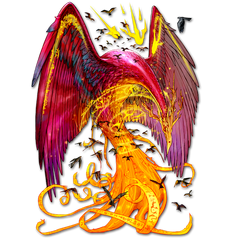 The co-op quests allow a maximum number of 3 characters per player.

Layout for battles 1-3 is picked randomly from two possible layouts (A & B below). In battle 1, player 1 is cyan, player 2 is orange, and player 3 is red. Battle 4 may contain additional enemies from battles 1-3 that are revived by Phoenix boss.

“ In this valley dwells one who holds sway over life and death... ”

“ To the fallen I offer life! To the feeble I bring death! ”