Palpa rules the subterranean stonefolk realm of Prah. She is a queen among queens, loved and revered by her people.

Her command of magic, cultivated carefully since birth, is virtually unrivaled.

She was instrumental in thwarting an uprising against her father, one of the stormiest conflicts in Prah's history. Swiftly mobilizing a defense, she obliterated every last one of the traitorous retainers responsible for the insurrection.

Palpa blazed like the sun on that battlefield. The soldiers who fought alongside her say that reserves of energy surged up whenever that light touched them.

With order restored and the royal house's authority secure once more, Palpa took the throne as sovereign of the stonefolk.

"A new world lies ahead. Sights, experiences, emotions we've never known before await us all."

As Palpa spoke, her gaze seemed to penetrate the planet's interior, fixed intently on something beyond their world, beyond even the unfathomably distant sea of stars above it.

The future that awaited was limitless, bursting with color and promise.

Of this she was certain.

Hope and regret dwell in all of us.

We can't change what's passed or avoid what looms ahead.

Yet even so, we find ourselves imagining what might have been or what could be. It's part of our nature.

It's also in our nature to pursue those visions--and sometimes we succeed, turning dreams to reality.

To you, another version of myself: I hope you find every happiness.

The possibilities awaiting you are endless. And as they converge, intersecting and interweaving into a larger picture, they'll light the way to your future. 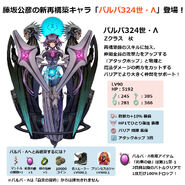