Olber is a 35-year-old captain of the Royal Guard.

He was lauded for his discipline, skill, and readiness to give up his life in the line of duty at any time. He was promoted to captain despite being a non-commissioned officer.

At home, however, he drank excessively and was the epitome of arrogance. His wife eventually left him, unable to take it anymore.

This heavy-handed behavior has condemned him to a life alone.

Concluding that a good offense is the best defense, he's launched an effort to purge the kingdom of renegade elements by force of arms.

He has realized that in order to protect someone, he must not fall.

This sentiment has strengthened and transformed him into a great sentinel.

"What's become of our land--of our world?"

Although assured that their home was safe, Olber couldn't believe it without seeing it with his own eyes.

All he could think about was his last glimpse of his forlorn wife and sobbing child as they left him for good.

Now so far from home, he realized for the first time that he should have protected his family first and foremost.

Olber didn't know if the family he had left behind would welcome him back. All he could do was try to win back their trust through sheer dedication.

Still, his resolve did not waver. This time, he would protect them.

"You'd make a wonderful father," Beau'ne remarked while at lunch with Olber one day. "Any child would be lucky to have you."

She spoke from the heart. Olber treated everyone equally and stood by his friends without fail. She saw him as an extraordinarily stalwart friend and ally.

With a melancholy smile, Olber said, "The truth is the exact opposite, I'm afraid. I was a wretched husband and a wretched father."

Beau'ne sensed agonizing remorse behind his words. "This may sound flippant," she said gently, "but I never would have guessed. I'm sorry."

Olber reflected on this, for his wife had flung similar words at him once:

"I never would have guessed you were anything like this!"

Beau'ne was gazing at him uneasily. Realizing he had frozen up, Olber relaxed and smiled.

"Don't be. I'm flattered, actually. That was the kind of man I wanted to be."

He drained the rest of his coffee, black and bitter, and returned Beau'ne's gaze. Her smile expressed relief. 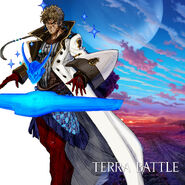