Lucia is a sorceress traveling the world on a personal mission.

A map and a key inherited from her father drive her onward.

He was a celebrated explorer. His freewheeling spirit was inspiring to Lucia but trying on her mother, who eventually gave up on him and disappeared.

Lucia blamed her mother for being petty. There was no man alive as cool as her dad, after all.

A day came when her father departed on his final expedition, never to return. The insatiable thirst for new frontiers that fueled his life ultimately claimed it.

He left no body to mourn, but he left Lucia the map and key. With these in hand, it was quite natural for her to rise up and carry on his legacy.

The night of his funeral, Lucia vowed to become an even greater explorer than her father had been. The next morning, she bade farewell to the only home she had ever known. She never looked back.

She set out into the unknown accompanied by a small band of magical creatures, gifts from her father and her constant companions. They're like siblings to her now, bound by bonds as strong as blood.

Lucia's father left one other legacy behind. His map is inscribed with a challenge:

"Fortune favors the bold. Find and collect them all!"

Those final words have become her lodestar.

Gift from the admin

The character Lucia was originally planned as a bonus gift with volume 1 of the biweekly Terra Battle magazine in Japan, but we're pleased to offer her as a gift to all Terra Battle players.

We're planning a variety of in-game events that will allow you to collect the monsters and items required to recode her into Lucia Λ, so stay tuned!

Thank you for playing Terra Battle. 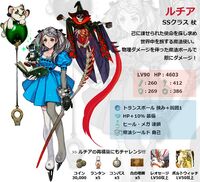