Lamia is a remedy-type Eidolon added in Version 2.3.0. Up to 3 players can join a Lamia room, with up to 2 characters each. 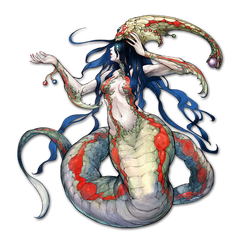 Lamia starts with a turn counter of 2.

Transition: When Lamia first reaches < 30% HP, she will do all of this in one turn.

Lamia differs from most other fights in that damage is primarily done by Poison, and both physical and weapon damage are not very effective. Placement is very important, as well as dodging.

This is a long fight, and placement of adventurers is more important than raw strength. Avoid debuffs from Hynpotoads/Kydoimos/Basilisk if you do not have skills to cure debuffs.

Most of the enemies are vulnerable to poison, so it is strongly encouraged to employ either Ellvern or Zafitte as they will be the primary damage dealers. It is important to protect these characters as defeating Lamia is almost impossible without them. The only enemy not vulnerable to poison is Perentie whom, while immune to poison, has a defense of only 31 allowing him to be killed by any offensive character that possess both a mega and giga attack. A high Skill Boost is important here to guarantee a quick kill as Perentie is the only monster who can inflict damage to the team and his breath attack can often send them into the neighboring area of another enemy. Ma'curi, and Zuzu are great at this role and their 1000 damage can also be used to finish off any enemy who didn't get killed by the poison. Other great choices are Bajanna who is immune to Basilisk's Death skill, Olber who can generate physical damage capsules, and Sheena as her Control Time skill can also help with positioning as mentioned below.

The next major role are the support units. Characters with Control Time get an extra 2 seconds with which they move units away from nearby enemies. Kuscah and Sorman work well in this area, posessing Control Time +2, a single guard skill, and multiple healing spells. Also useful are characters with immunity to status effects such as Bonna, Kana, R'zonand, and Zeera. This is because if all of a player's characters are inflicted with confuse, sleep, paralyze, or petrify then that player loses their turn, giving the opponent an additional round in which to infect the rest of the squad. While they also possess the ability to remove those effects from others this is less useful as they must be part of a chain to be used which would give a different set of characters a different status effect. This is considered acceptable for Bonna and Zeera though, as Petrify lasts 20 rounds as opposed to 3 and prevents the character from being able to be moved out of danger. Other great support units are A'misandra and Gaiga as their Death Ward, Chain skill can negate the effects of Basilisk's Death, Area (1).

As for which Eidolon to bring, Artemis, Valkyrie, and Xerxes are very useful as they are the perfect counter when Lamia summons a swarm of Perentie to the field after dropping below 30% health, with Xerxes having the additional benefit of poisoning the rest of enemies currently on the field. Chaos is also a good choice as his ability to steal a turn will grant players an additional turn to escape a bad situation as well as give poison another turn in which to hurt enemies.

More important the choosing what units to use is understanding how to arrange them in battle. Always strive to kill off all of Perentie first, as once they are gone players can safely stall as no enemy possess the ability to damage any of the characters. After this focus on avoiding contact with all enemies, letting the poison or bombs finish them off. This time can be use to charge the summoning gauge and allow units to recover on their own from any status effects they are currently under.

It is recommended to enter the 4th round with the majority of the party on the bottom half of the screen. Units in the top left or right corners can be easily boxed in by the basilisk or other units and become impossible to rescue. Focus on her minions first as Lamia's only dangerous ability is pushing the characters into the range of the other enemy units and avoid placing units near corners as they can easily become trapped. Be sure to keep an eye on what attacks Lamia uses as she should only be pincered on the turn after she casts Panacea to avoid her powerful Ram attack. Also important is to keep an eye on Lamia's HP as once her health drops below 15,008 she will begin her turn by casting Paralyze, Confuse, and Petrify on all neighboring squares, followed by summoning 6 Perentie to the field with a turn count of 3. Lamia also changes her tactics at this point by becoming stationary and replacing her Nullify Healing and Breath Attack skills with Ram. Having a saved summoning token at this point is very useful as it will allow a player to use a physical Eidolon to kill all of the Perentie who can easily destroy the party if not dealt with quickly. After all the Perentie are dead, continue with the same tactics as before and Lamia will be easily defeated.