Kuscah is an aging cleric on a never-ending spiritual journey. He is quite spry for his age and is always telling jokes. Though corny, they (sometimes) bring smiles to his fellow travelers, making him a welcome presence on the road. His optimism is overshadowed only by his insatiable appetite, which is all too apparent from his large belly. While it bothers him somewhat, he is flexible enough to accept such changes as he continues to grow and develop on his travels.

Cavorting with beasts has made him even wilder than before. He sometimes speaks so colloquially that he seems as incomprehensible as a teenager, but he remains highly respected for his healing skills. His growing gluttony has gotten him blacklisted by the Chefs' Guild, and he has allegedly become quite a womanizer as well. This is a man to be reckoned with!

His carefree nature--both a strength and a weakness--has been tempered by the machine's effects. He no longer spouts off corny jokes and now appears to be a quiet, mild-mannered old man. While some lament this change and others welcome it, one thing is certain: supper with your companions has grown a little quieter.

"Care for a swig? This is apparently a local brew."

Kuscah filled a silver cup for 54B2, who promptly drained it without so much as a pause for breath.

54B2 reached for the bottle to pour him a cup in return, but Kuscah wouldn't hear of it.

"Out of the question. We can't have a king pouring for peasants now, can we?"

So saying, Kuscah helped himself.

"Ya know, you've got a pretty bawdy side for a king!" remarked Kuscah, slapping 54B2 on the back with a hearty laugh.

It had surely been millennia since he'd had friends he could speak freely with like this.

Ale can be a dangerous brew that severs ties and shatters lives, but it can also be a magic elixir that strengthens the bonds between our souls.

In the city of Agra, Kuscah was drinking alone one day when Mogha suddenly approached with the news that he'd discovered an exclusive hidden oasis.

Intoxicated by ale and tantalizing promises, Kuscah soon found himself drawn in. Mogha simply urged him to follow, refusing to elaborate.

When they reached the designated spot, Kuscah halted in his tracks, eyes wide.

"Th-this is..." He was too thunderstruck to say more.

Mogha's smile had taken on a wicked edge. "I knew that you of all people would appreciate it."

Kuscah found his voice at last. "A women's bathhouse!" he cried, tears of joy in his eyes.

Aware that he was about to sober up quickly, he silently exchanged a jubilant handshake with Mogha.

Little did the two men know that a painful fate awaited just ahead. Within mere hours, a swarm of mechanical insects would descend and leave them helpless until morning, faces swollen and all but paralyzed. 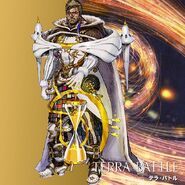