Korin belongs to a special civilian unit of Prah's military forces known as the Holy Swordsmen.

Above all, Korin despises carrots. The mere sight of one is enough to make him pass out in disgust.

A rival caught wind of this and began to ambush him with carrots almost daily.

Sometimes Korin would wake to find them in his bunk. Sometimes they would appear in his satchel or in the latrine. At length, he suffered a nervous breakdown and sank into a deep depression.

Korin grew reclusive, and instead of realizing his potential and rising through the ranks, he simply stagnated as the years passed.

But a day came when his luck changed at last.

Through a series of lucky accidents, Korin rescued Queen Palpa from a band of thugs, driving them off and saving the royal house from disaster.

Tales of this exploit captured the hearts of Prah's many underdogs. Coupled with his good looks, it catapulted Korin from zero to hero overnight. His meteoric rise to fame culminated in a film adaptation starring Korin himself.

He still hates carrots, by the way. 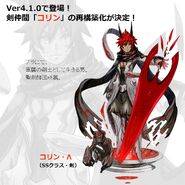