Jennish was once known as a great hero until he retired for a time. His bond with mini-orblings allows him to manipulate atmospheric pressure to summon lightning from the sky.

It is said that there was once an elite unit of humans with the special ability to control orblings. Most did not live long, however, and only one now remains in this world.

Jennish is that sole survivor. His once mighty power has dwindled almost entirely away, and he can now wield only a fraction of the spells formerly at his disposal.

The splendor of such finely honed skills never fades completely, however. Through the two orblings that accompany him, he can still unleash spells of massive power.

Long ago, however, he was the best of the best, the only member of the special orbling unit who could control two mini-orblings. The key to this lay in a secret surrounding his birth. Scans revealed that his body contains the complete anatomy of another human within. While he has no siblings, it is thought that perhaps he absorbed a twin while in the womb.

"I don't like machines. Don't you get it? Some things are best left in the dark."

"Youngsters these days are such slave drivers..."

Jennish was an old man with little or no energy left in the tank. Yet he ran, he fought, and he laughed heartily.

All this was thanks to a body honed and fine-tuned through years of hard training. He was all refinement and no waste.

Then one day, a young recruit under his supervision murmured this to him:

"With machine support, you can accomplish the same thing far more easily..."

"My, how times have changed," Jennish said in wonder.

He subsequently began special lectures on the true nature of things. 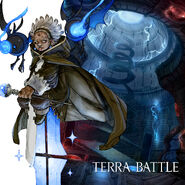