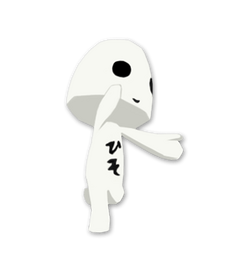 Hiso Alien is a mascot character of Mistwalker and Terra Battle.

“ The Origin of Hiso (Arsenic) Alien

During those hype time, Hiso Alien was born. (^^;

Recently, some researchers have been doubting the evidence for this bacteria; even its existence is shaky. At the end, Hiso Alien might be the only survivor?! ”