View source
watch 01:36
We're Getting Mutants in the MCU - The Loop
Do you like this video?
Play Sound

Details on how combat works. 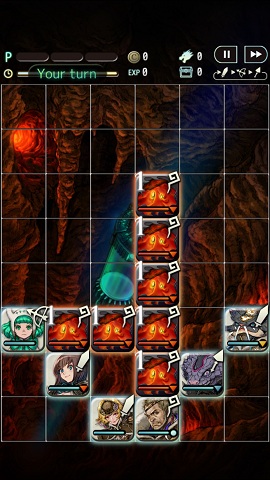 Skills are an essential part of combat.  Skills are either constantly in use (Equip), or have a percentage chance of activating during an attack or chain (xx%).  Note: Some skills are not able to be activated by a chain; they trigger only during an attack (ex. Fire Arrows, 80%).

You can select one unit to actively move by dragging it across the battlefield.  Once movement begins, you can move that unit for up to 4 seconds.  During your movement, other allied units can be passively moved by displacement of your actively moving unit.  Enemy units cannot be displaced by your movement.  Releasing the unit or the timer expiring will end your movement, and any units in proper placement will attack the enemy.

In order to attack, you must flank enemy units on opposite sides.  Enemy units in the corners can be attacked by flanking the only two sides available.  Attacking is not limited to the unit you are actively moving during your turn.  Any or all of your units in proper placement at the end of your movement will attack.

Multiple adjacent enemies in the same row or column can be attacked simultaneously by flanking the row or column of enemies, as you would a single enemy.  There is no loss of damage when attacking multiple enemies, so definitely use this to your advantage!

Once you've flanked the enemy, your units will prepare to attack.  Any allied units in the same row or column and with no enemy units in between an attacking unit will assist the attacking units by providing an additional attack, and will also attempt to trigger their skills.