Amimari is a nurse. The thrifty beastwoman still wears the same uniform purchased with her first month's wages. Although it no longer fits, she says she doesn't mind because her retirement fund is a bigger concern. The beautifully arranged box lunches she makes in her spare time are said to have transcended mere hobby to reach the level of art.

Though she appear young, Amimari has suffered through much in life. Because she has no family to rely on, she's more focused on survival than learning and has never had the chance to enjoy her youth like her peers. She is sustained solely by the promise she made at the behest of her dying mother: "Live for the sake of others." Those words and her mother's voice remain vivd in her memory to this day.

She perpetuates her mother's love by never harboring grudges toward anyone. "Love thy neighbor and forgive the trespasses of others" are the words she lives by. She believes this is important as a therapist, which she considers her calling. However, she is occasionally haunted by nightmares about an unscrupulous lawyer who framed her father and drove her family to ruin. Her father died of shame and grief, and her heartbroken mother fell ill and soon followed. Rumor has it, however, that that lawyer has since met his downfall at the hands of certain children. Amimari still has her whole life ahead of her. Today, too, she'll bring her patients comfort through her care, including the lunches her mother taught her to make with love.

In one of the starship's narrow corridors, Amimari accidently bumped into Rikken. "Oops... Sorry about that, Rikken." As she tried to calm Rikken, who was ranting on and on about people not watching where they were going, her eyes strayed to Rikken's notebook. It had fallen open, and Amimari could see one of its densely written pages. "Ah!" Something therein gave Amimari a start. The notebook was entitled "Kills," and it was a record of all the names of people she had utterly defeated and destroyed publicly with her silvery tongue. Amimari's eyes were glued to the notebook, as if she could not look away. Then tears started streaming from her eyes. "Thank you," she said. But Rikken knew not what her thanks was for. 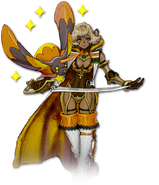 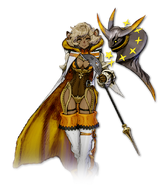